Lights, Camera, ACTION! – My visit to the Seoul Action School

In November 2008 I was set to make my first visit to Korea, and while most people have a certain list of must-see places to visit in the capital, Seoul, such as the 24 hour Dongdaemun market complex, the nightlife of Hongdae, or the arts & crafts lined street of Insadong, my list contained a slightly different place than the guide books usually mention – the SAS, more commonly known as the Seoul Action School.
2008 had saw the release of the excellent documentary ‘Action Boys / 우린 액션배우다’, which followed the trials and tribulations of a group of fresh faced stuntmen who where looking to make it in the Korean movie industry. The documentary deserves to be ranked as one of the best of its kind, as it follows both the emotional and physical roller-coaster the guys go through as their journey goes from students to fully fledged stuntmen, and most of their training takes place in none other than the .
A large portion of the documentary is dedicated to a movie that, in a rare chance, the whole school got to participate in, and that movie was the 2006 Ryoo Seung-wan helmed ‘City of Violence / 짝패’. I had watched ‘City of ’ upon its release a couple of years earlier, and been impressed by what was, for the first time in many years, ’s attempt at a fight-based action movie. The fact that the tied both of these productions together made it a natural place to want to visit for me.
I breached the subject with my Korean friend that I was staying with at the time in Hyehwa, who responded with something not too far off from, “Why on earth would you want to go there!?” It wasn’t exactly a promising start to achieving my visit, nor was it promising when upon further research we discovered the exact location of the school is not exactly in , but a 2 hour plus bus journey away in a place called Ilsan.

Still, persistence is the key, and after much deliberation my friend agreed to give them a call and arrange a visit. Prior to my interest in going, I had been aware that only a year before in 2007, Hong Kong film expert and fellow Brit Bey Logan had visited the school, to shoot an interview which was to be an extra on the US DVD release of ‘City of Violence’, so I had hoped a foreigner visit was not such an unexpected request for the staff there.
Unfortunately this wasn’t so, and my friend relayed to me with a certain enjoyment how surprised the staff at the school where that yet another random guy from wanted to check them out. Putting on a humble face to entertain my friends’ amusement, I did my best to breach the question as subtly as possibly as to if we could actually go there, and after a few brief moments, my friend broke out into a resigned smile and said, “Yeah, we can go tomorrow”.
So, less than 24 hours later, off we went into the ear achingly cold November morning on our trip to see the place where most of Korea’s actors and stuntmen go to learn their trade or perform a fight scene, stunt, or whatever other injury risking activity can be thought of. Even the soju induced hangover couldn’t diminish my enthusiasm, though the same couldn’t be said for my friend, who had somehow contorted himself into a sleeping ball in the bus seat, occasionally muttering curses in Korean.
Eventually the time came for us to get off, and as we stepped from the bus we where greeted by what I discovered was a government-sponsored artist’s village, consisting of a dozen idiosyncratically designed structures scattered across a patch of countryside. The village, it must be said, is very much in the middle of nowhere, and literally appears on the side of the road after several minutes of rather characterless brown fields. And while being on the subject of characterless, despite being confronted by various wonderful sculptures and brightly painted statues, I couldn’t help but notice that my friend & I where the only two people in sight, well, it was a Tuesday afternoon.
After tucking into some bibimbap at a café we found on the grounds, my friend asked the friendly chef where we could locate the , and to our surprise, he pointed to the building just a few meters away from us over the road. The from afar represents something akin to a large slab of concrete, with a few windows interspersed here and there, however, only once you get up-close is it possible to appreciate what an impressive facility it is. Even looking from outside in, it was possible to see people flailing away with swords, practicing high flying 360 degree taekwondo kicks, while others sailed down from the second floor to the first on wires, this place was the real deal.

The master of the stunt school, Jung Chang-hyun, was very kind to show both me and my friend around the purpose built structure, which consists of a central high-ceilinged main training hall, equipped with all manner of wire equipment and matting, with doors leading off it to offices, a conference room and sleeping quarters. Korean stuntmen come here to hone their skills, choreographers to train actors, and directors to rehearse sequences for upcoming projects. Novices are accepted and trained for free, and can stay on campus, such where the subjects of the documentary ‘Action Boys’. He also pointed out that a scene from a movie had been filmed here just a few months before, which turned out to be ‘Public Enemy Returns / 강철중: 공공의 적 1-1’, the direct sequel to the 2002 classic. 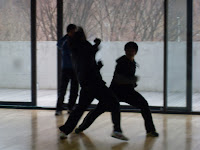 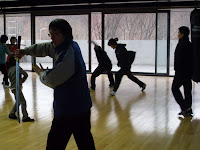 At the end of it all even my friend admitted to being impressed, and we watched ‘Action Boys’ and ‘City of Violence’ back to back that same night, needless to say in the same kind of conditions that had given us a hangover at the beginning of the day, but it’s always worth it when it’s possible to make a Korean person a fan of Korean cinema. Kanpai to that!
More information about the can be found on their website - http://www.sats.co.kr/
Paul Bramhall
@Paul Bramhall
Posted by Paul Bramhall at 1:52 PM