cinema has over the years developed, and in most cases created, some rather niche genres, from the ‘revenge seeking gangster’ movie to the ‘terminal illness love story’.  In recent times it looks to be adding the ‘two guys in the Korean war’ genre to it’s array as well, with movies like ‘Taegukgi / 태극기 휘날리며’ and ‘My Way / 마이 웨이’ following the formula, and in 2011 director Jang Hun gave us ‘The Frontline / 고지전’ to throw into the mix as well.

Hun is certainly no stranger to the male bonding formula, with his two previous movies also exploring the relationships between two male characters in ‘Rough Cut / 영화는 영화다’ and ‘Secret Reunion / 의형제’.  In ‘The Frontline’ the relationship is between Shin Ha-kyun’s character of Kang, who is sent to investigate the Alligator Battalion after an officer is found dead from a South Korean bullet, and Ko Soo’s character of Kim, who is second in charge of the battalion and had been believed to be dead by Kang. 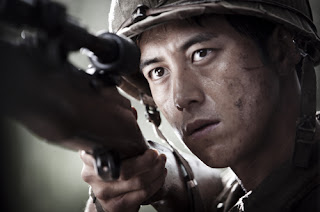 The movies period setting is actually quite unique, as it unfolds in the last remaining days of the Korean War when much of the fighting had calmed down.  However there’s a patch of land situated on a hill on the front line border which has been fiercely fought over countless times between the North and South, and it shows no sign of calming down even in the dieing days of the war.  This isolated hill and the surrounding areas provide the location for most of the events which take place, and Hoon does a good job of conveying that sense of being isolated from everyone else, as each of the characters question when the war is ever going to end, while others both on the South & the North admit to forgetting what they’re fighting for in the first place.

It’s these notions that set ‘The Frontline’ apart from many of it’s peers done in the same vein, Hoon crafts a piece were the North are never really portrayed as being the bad guys, instead he successfully crafts a movie where the scope is much broader and epic.  It’s war itself which is the enemy here, with people on both sides questioning why they’re still there and for what purpose. 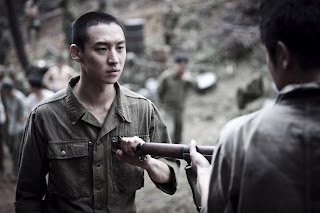 In the middle of all this is Kang, an officer at first sent to investigate the suspicious death of a fellow commander, he soon finds the death is actually just a minor detail in a much grander picture of disenchantment and dehumanization.  When he first meets Kim, who he believed to be dead after last seeing him being dragged away by North Korean troops, the reaction is one of meeting a long lost friend, yet as an audience we’re also suspicious that he could be a mole for considering the events which took place before.

However this mystery element of the plot, which should you read any synopsis of the movie is no doubt the genre it seems to fall into on paper, is put to rest within the first hour, and this is a two and a quarter hour movie.  The focus instead shifts to the way Kim & his Alligator Battalion appear to have become completely desensitised to the death and sorrow going on around them.  It’s frequently hinted at that it’s due to something that took place during a previous battle which nobody wants to talk about, and indeed Kang’s reactions to the way Kim almost nonchalantly shoots people drive home the horror of what a single bullet can do. 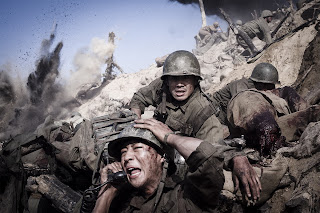 As much as the movie keeps a tight focus on Kang and his discoveries during his investigation, which becomes less and less important as the movie moves along, it also doesn’t shy away from containing some gritty and realistic battle scenes.  While not quite on the grand scale as say ‘Saving Private Ryan’ or ‘My Way’, the scenes do a highly effective job of putting you right in the middle of it through some good use of hand-held camera work, to the smart decision to just focus on one or two characters reactions to the chaos around them, as opposed to trying to capture everything from afar.

By the time the final futile battle is held, Hoon doesn’t hold anything back as the full horrors of what war is really like are unleashed across the screen, and as skillfully as it’s done, pretty it isn’t.  It’s hard not to feel a sense of despair watching the scenes play out, and it’s worth noting that that’s to the movies credit, not its detriment.

All in all ‘The Frontline’ comes strongly recommended, all of the cast put in great performances, from Ha-kyun (Thirst) and Soo to Lee Je-hoon (Bleak Night) and Ryoo Seung-yong (making his second appearance in the Korean Film Festival after playing the bad guy in ‘War of the Arrows / 최종병기 활 (活)’), and it delivers an original plot amidst the expected scenes of chaos and explosions.  Korean directors seem to have the war movie down to a fine art, create characters that we care about and relate to first, then unleash the visual bombardment only once that’s been established, and as long as they stick with that policy, count me in for the next one.
Posted by Paul Bramhall at 10:42 AM