On Monday 22nd October, the lucky few of us who worked at this years Korean Film Festival in Sydney were given the opportunity to attend the DENDY Cinema in Newtown’s screening of the 2009 movie, ‘The Recipe' (된장). A movie that revolves around the traditional Korean dish of doenjang jigae, or soy bean soup as it’s most closely translated in English. Hats off to whoever it was that came up with the stroke of genius to get local Korean restaurant, Paju, to put on a buffet style Korean feast in the cinema lobby before the movie started. 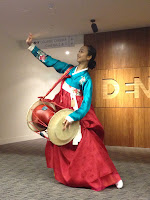 Being a guy whose mood is dictated by how much food is in his stomach, I was immediately put into a state of euphoria by the stacked plates of bulgogi, kimchi, and various others on display.  Not even the woman sat close to me who was educating her husband about the “Japanese superstar”, Psy, could distract me from the plate, and to top it all off Hyun provided us with a beautiful performance of a traditional Korean dance.

With appetites satisfied and senses awakened, it was time for the movie.  As someone who considers himself pretty familiar with the Korean movie scene, I have to hold my head in shame and say that ‘The Recipe’ flew completely under my radar, not even the name was familiar. Although once I saw the poster art I knew I’d seen it before, obviously for someone who tends to lean towards the grittier side of Korean movie making, I realized that I’d obviously dismissed a film about a spicy stew without a second thought. After all, how can you make a whole movie that revolves around a dish that’s normally eaten within 10 minutes?  (or is that just me?) 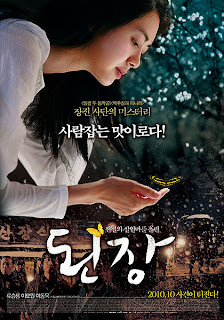 Well, ‘The Recipe’ answers that question in an interesting way. To define the genre of the movie would depend of which part you were watching, as if someone only saw the beginning, middle, or end, I’ve no doubt all three would come back with separate answers. At times it appears to be a murder mystery about a serial killer, then it shifts to a comedy about a bumbling reporter, for a few moments it seems it’s going to have elements of the supernatural, before eventually it seems to become the tale of two doomed lovers.

Confused? You should be, the movie delicately balances these dramatic changes of tone, and indeed in complete changes of direction, as best it could, and just about gets away with it.  As you can image based on my description of what type of movie it is, to actually get into details of the story could potentially take up a whole page. Suffice to say, it boils down to a reporter, played by Ryoo Seung-yong (‘War of the Arrows’ or 최종병기 활 (活)) attempting to track down the person that made the Deonjang jigae that, at the start, is introduced as being so good it led to an elusive serial killer being caught, as he simply couldn’t stop eating even with the police completely surrounding him.

You’d be forgiven for thinking that such a scene sounds comical, but actually there’s a certain beauty to the way it’s captured on camera.  The police storm into a small isolated restaurant that resembles a log cabin at night, filling the restaurant air with snowflakes from the storm outside, and the whole thing is filmed in slow motion, as the fugitive in question sits there sipping on the stew in real time. The cinematography of the movie is consistently unique and creative throughout, even including animation at one point, but this particular shot was the highlight for me.

From there, upon learning that it was made by a mysterious girl, played by popular drama actress Lee Yo-won, it follows his investigation to find out where she is and how she made such an amazing dish that could make even a serial killer forget about the world around him. Such is the structure of the movie, that to go into any more details would involve going into spoiler territory, so I’ll leave the rest to be discovered by the curious amongst you.

All in all ‘The Recipe’ can be considered a success, if the movie was a much more in your face affair it would no doubt fail miserably, but due to it’s unassuming, almost curious nature, as an audience it manages to keep us along for the ride to the end. Weather we’re watching the last words of a man about to be hung for murder, a group of ladies taking a Doenjang jigae cookery class, or a lonesome soul waiting for his lover to return, what shouldn’t fit together in anyway whatsoever somehow does. This is no doubt due to the solid performances of everyone involved, every character comes across as likeable, with even the serial killer unable to come across as particularly evil. Ryoo Seung-yong makes for an engaging lead as the reporter who doesn’t seem to know exactly what’s going on, but as the movie is told from his perspective, it’s easy to become endeared to his character, who’s often as surprised at the direction things go in as we are.

This movie was director Lee Seo-goon’s debut, and so far only, feature, but I hope it won’t be her last and we’ll get to see more of what this clearly very talented film maker can do. Equal parts a mish mash of opposing genres as much as it is a love letter to the spicy stew no doubt everyone who watched it is now very familiar with, ‘The Recipe’ is worth a look purely for the effortlessness which it carries itself with, and for those of you who like cooking, bringing a pen & paper is strongly advised.
Posted by Paul Bramhall at 4:36 PM