Much like what last weeks ‘Miss, Please Be Patient’ was to the filmography of Kim Tai-jung, ‘Canton Viper’ is the same to the filmography of Korean super-kicker Hwang Jang-lee. For anyone not familiar with the most formidable kicker ever to grace the silver screen, please check the blog post I wrote during the Korean Film Blogathon earlier this year for a lowdown on why this guy has the reputation he does. 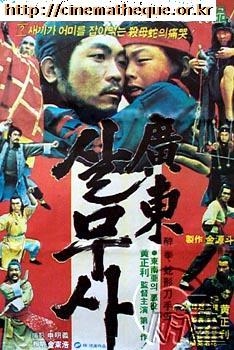 ‘Canton Viper’ was another of many Korean movies long thought lost, only to be discovered and pulled up out of obscurity by the guys at ‘Houndslow Team’, and on 15th November it got its premier showing in Australia. With the help of Jon-James Hodson, a film-maker currently in post-production on his Hwang Jang-lee documentary ‘The Anonymous King’, we were able to film an exclusive interview with Jang-lee, who is now almost seventy but certainly doesn’t look it. Shown before the movie started, he shared some interesting anecdotes from filming and the difficulties they had to overcome, giving a unique insight into what it was like to make a kung-fu movie in Korea back then. 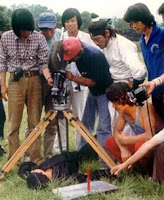 There is no mistaking ‘Canton Viper’ as a Korean movie for a number of reasons, but perhaps first and foremost it’s because of the story. While most people watching Hong Kong kung-fu movies did so purely on the basis of the fight action on display, with little to no attention paid on storyline or characters (indeed, many Hong Kong movies of the era didn’t even film with a script, instead just making it up as they go along), the case with ‘Canton Viper’ is quite different.

It was well known that no country could match the Beijing Opera based choreography of Hong Kong’s movies, filled with intricate exchanges, acrobatic flourishes, and various kung-fu styles. Korean choreography on the other hand came across as clunky and rehearsed, yes it was the country that brought us the likes of Taekwondo and Hapkido, but it seemed there was no action director on home soil who could transfer the skills successfully to a screen fighting aesthetic.

‘Canton Viper’ doesn’t suffer from such painful choreography, however it is definitely a step below Hong Kong’s efforts around the same era. What makes ‘Canton Viper’ unique is that, after a while you don’t even care about the fighting so much, as you become engrossed in what is actually a very engaging tale of redemption and revenge. Yes Hwang Jang-lee’s kicks are still there, and they still look as hard and vicious as ever, but his trademark standing bicycle kick and multiple opponent flying kick are both absent, as is indeed a final fight, which leads me to believe that for him the story was also the most important.


Barely a few minutes into the movie and we’re presented with Jang-lee’s killer for hire being surrounded by a hundred of the best swordsmen, all intent on taking his life. What follows is a long drawn out battle scene, with Jang-lee literally taking down every last one of them, before stumbling away severely injured and exhausted. The mother and son of one of the swordsmen go to see for themselves, refusing to believe their beloved is dead, and upon realizing it’s true wonder around lost until they stumble upon what seems like a deserted house.

It’s while they’re there that Jang-lee also turns up at the house injured and in need of rest, and as the mother and son have never seen his face before, they presume he’s one of the swordsmen who were trying to defeat the very person sharing a house with them. So it begins, they nurse back to health the very man who killed the person they love the most, and it’s only a matter of time before the truth has to be revealed.


‘Canton Viper’ is a really unique kung-fu movie in that storyline and character clearly come first. It’s a pleasure to see Jang-lee in a lead role, and as with last weeks movie it’s actually his real voice, and not a dubbed Cantonese one as was required with the majority of Hong Kong movies he starred in, of which there are over two hundred. Jang-lee spent most of his career as the bad guy, so while he always left an impression, his screen time was not always necessarily that much, so to see him here as the main character, and what a conflicted tragic character he is, makes the film special just based on that. 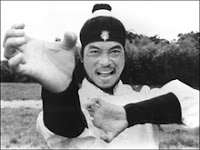 The fight scenes are still plentiful though, complete with some occasional bizarre effects thrown in, such as telekinesis, the ability to control water, and characters moving from one location to another in a single leap. The triangle of mother, son, and killer makes for a tense plot, and shades of ‘Canton Viper’ can be seen in the likes of both ‘Shiri’, and more recently the Chinese movie ‘Wu Xia’. While Jang-lee made a movie which is obviously quite low budget and not on par with Hong Kong’s best efforts, the emotions behind the story are just as strong as any movie out now, and it’s that which makes ‘Canton Viper’ work so well.