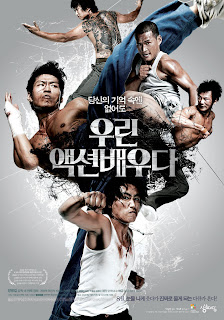 After watching the high kicking heroes of the previous three weeks movies, the final week of action month couldn’t have finished with a more appropriate choice than the 2008 documentary ‘Action Boys’.

Made on a shoestring budget, the documentary chronicles a five year period, from 2004 – 2008. Beginning with the thirty-six students that make up Seoul Action School’s class of 2004, thanks to the grueling training regime, by the time of graduation only eight of them remain. If anyone wants to check out the Action School in more depth, I did a blog post of my visit there. It’s not long before even some of the eight that remain decide that perhaps the faceless world of stunt work is not for them, and the documentary eventually settles its focus on four of the graduates and their adventures, or often mis-adventures, into the movie industry.

You could say that there’s a fifth, who comes in the form of director Jeong Byeong-gil. The documentary opens by explaining the so far rather hapless life of an art student, who consistently fails to get into the universities that he wants and is equally as unlucky in love. Upon realizing that he’s become a video watching slouch, he enrolls into the Seoul Action School, perseveres through the grueling training, and even directs a short blood splattered action feature were he cast himself as the lead. However there’s a problem, while nobody questions his directing talent, everyone insists he simply doesn’t have the looks to be a leading man, and should stick to directing. So, upon hearing the overwhelmingly similar responses, the female narrator of the piece informs us that he’s vowed to only direct the very documentary that we’re watching.

It’s this kind of off-beat humour that defines the tone of ‘Action Boys’, and it’s worth noting that perhaps Byeong-gil did indeed get the last laugh, as recently he made his feature film debut as both director and screenwriter with the movie ‘Confession of Murder / 내가 살인범이다’. However even in ‘Action Boys’ his talent for direction is obvious, balancing the humour while capturing the very real emotions of what are never just stuntmen, but rather human beings who are very easy to relate to, as they struggle with injury, finances, frustration, fear, and hope. The humour never overshadows the reality of what is really a very dangerous job, and Byeong-gil strikes the balance perfectly. 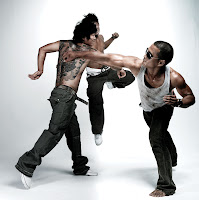 No doubt another contributing factor are the subjects themselves, out of all eight of the graduates, it’s Kwon Kwi-deok, Kwak Jin-seok, & Sin Seong-il who throw themselves into movie & TV stunt work the most. Another graduate, Jeon Se-jin, is a country boy from Jeju Island, and most of the humour comes from his ability to not be able to hold down a job for what seems like more than a week. The other three graduates also drift in and out during the runtime, giving us a glimpse of the directions their lives take them - be it becoming a father, chasing the dream of being a pop star, deciding to go for the safety and stability of being a teacher, or most amusingly, becoming a member of the Power Rangers stage show. The stuntman who plays one of the female rangers reveals that he hit it off with the radio actress who was his characters voice, and in another twist, it’s revealed to be the narrator of the documentary!

Things aren’t played for laughs all the way through though, and plenty of time is dedicated to the actual stunts themselves. Weather it be capturing the tension just before a car flipping stunt, or the planning that goes into jumping off a bridge, Byeong-gil allows us to see things from a human perspective rather than a fearless stuntman ready for anything. It’s this approach that actually allows the documentary to transcend its subject matter, and become something that we can all relate to, be it apprehension, uncertainty, or anxiousness.

When ‘Action Boys’ was first released, a lot of attention was paid to the fact that it was the film crew that broke the news of a stunt director Ji Jung-hyeon’s death on the set of ‘The Good, The Bad, The Weird / 좋은 놈, 나쁜 놈, 이상한 놈’, and this part of the documentary does indeed hammer home how dangerous a stuntman’s life can be. We get to see an interview done with Jung-hyeon in his only TV appearance, and it serves as a fitting tribute to the man who became the youngest stunt director in Korea, and can be seen in many of our favourite Korean movies if you look closely enough. The guy hanging onto the car when Lee Byung-hun makes his escape in ‘A Bittersweet Life / 달콤한 인생’, that’s him. The guy Seol Kyeong-gu throws out of a second storey window in ‘Public Enemy / 공공의 적’, that’s him as well.

Speaking of movies, for any fan of Korean cinema, there’s plenty of behind the scenes footage and intriguing anecdotes from a variety of well known features, so if you’re a fan of ‘The Host / 괴물’, ‘Crying Fist / 주먹이 운다’, or ‘City of Violence / 짝패’, along with the previously mentioned movies, then ‘Action Boys’ should definitely be of interest. Thanks to its universal appeal of seeing a group of normal guys chase after their dreams, ‘Action Boys’ comes as an easy recommendation for anyone, not just fans of Korean cinema or action movies, and it’s for this same reason that at times it’s even more entertaining than the movies it features! Well worth a watch.
Posted by Paul Bramhall at 10:32 PM