Last year, I visited Korea for the first time and made it a priority to attend the Busan International Film Festival after hearing much about it through social media and friends. The experience was out of this world - never had I been to a festival that an entire city was in tune with in every kind of way.

There were two films that stood out to me the most amongst all the Korean films I saw at the festival. One was Kim Ki-duk's outstanding film Pieta, which was also included in the 2013 program of KOFFIA, an excellent comeback from the elusive Korean director. The other film was from a relatively new director and a new force to be reckoned with in the Korean film industry, and was possibly the biggest surprise for me at the festival. I had not heard anything about the film, or the director, and was going with gut when I decided to grab a ticket to see it.

The film was Pluto, directed by ex-school teacher turned filmmaker Shin Su-won whose short film Circle Line (also screened as part of the K-Shorts Showcase at KOFFIA this year) was awarded the Canal+ Prize at the Cannes Film Festival in 2012. For a film that was made without the support of large funding bodies, Pluto is an incredible achievement for the kind of film it is and I would gladly tell you why.
Read more »
Posted by Raelene Loong at 11:09 AM No comments:

I have never hated myself so much for not taking tissues to a film. Never. And I am the kind of person who normally trusts your word on this. Miracle in Cell No. 7 is a film that knows exactly how to pull at your heart's strings, over and over again, and doesn't shy away from ensuring you get a good cry out of it. 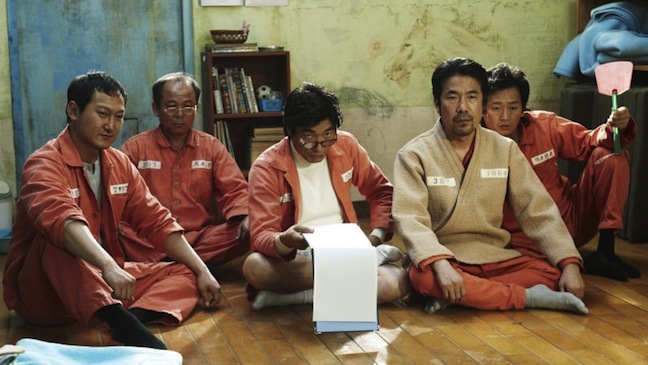 Part comedy, part drama, Miracle in Cell No. 7 tells the story of Yong-gu (Ryoo Seung-ryong, Masquerade), a mentally challenged man with the capacity of a 6-year-old and his young daughter, Ye-sung (Kal So-won/Park Shin-hye). When Yong-gu is wrongly accused for the murder of a young school girl, he is sent to prison, leaving him separated from Ye-sung. When his cellmates learn of his disability and longing for his daughter, they devise a plan to sneak Ye-sung into the cell to reunite her with her father.

Read more »
Posted by Raelene Loong at 1:16 PM No comments:

The documentary ‘Project 577’ had an unlikely origin, with actor of the moment Ha Jung-woo vowing that if he won the best actor award at the Baeksang Arts Awards, the Korean equivalent of the Oscars, for two years running, he’d embark on a cross country trek. In 2010 he took the award for his performance in the Winter Olympics ski-jump drama ‘Take Off’ (국가대표), and in 2011 he did indeed win for a second consecutive year as a North Korean on the run in the thriller ‘The Yellow Sea’ (황해).

Read more »
Posted by Paul Bramhall at 12:40 PM No comments:

How shaped are we by our middle school days? Do our experiences there decide how we live the rest of our lives? Are our memories of this period fond, or continue to haunt us? Can one ever let go of those experiences? 'The King Of Pigs', a harrowing and violent Korean animated drama written and directed by Yeun Sang-ho, impressively delves into these questions. 'The King of Pigs' won three awards at the Busan International Film Festival and was selected to screen in the Director's Fortnight at the 2012 Cannes Film Festival. It made its Australian premiere at the Sydney Film Festival in the Official Competition. 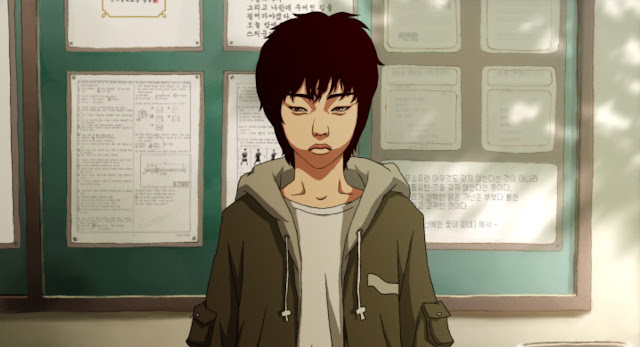 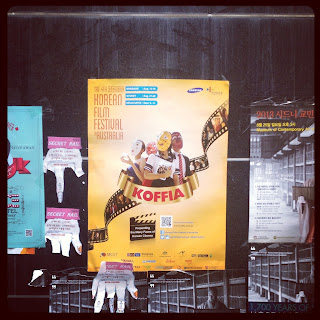 During the Korean Film Festival's Sydney leg I was lucky enough to attend a Cinema Forum in the Korean Culture Office. The subject was ‘Thrilling Shorts and Dark Matter’, and was to be attended by the actress Kim Kko-bbi, directors Moon Byoung-gun & Shin Su-won, & producer Lim Chung-geum.


The forum lasted for about an hour, and gave the opportunity for this years special guests at the Korean Film Festival of Australia to provide some valuable insights into what it takes to work within the Korean independent and short movie scene. Special mention has to go to Moon Byoung-gun, who thanks to embracing the spirit of Australian culture during the day through partaking in a few Aussie beers (this was revealed after the forum finished), arrived on stage fashionably late with a healthy glow and a spring in his step.


The directors discussed at length what it takes to really get a short film which doesn’t have the backing of a large studio or a significant amount of funding behind it out there to a larger audience, as they regaled us with their adventures in film festivals such as the prestigious Cannes, and their own experiences closer to home at the Busan Film Festival.

So any day or evening at KOFFIA will involve more than just seeing the film. Your friends might want to go eat somewhere as well. I'm going to assume you know your authentic Korean food and where to go to get it; Especially when you think of Korean food you think of a big B, quickly followed by another B and then a Q. But I'm going to look further afar while still maintaining some Korean ties. For those interested in a bit more variety than your usual Korean cuisine, read on. Don't worry. There'll be no mention of Old Boy and places to go eat octopus. Except that one.

Read more »
Posted by Michael Collins at 2:51 PM No comments: 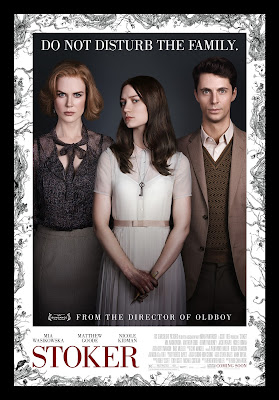 Director Park Chan-wook sure likes to keep us waiting for a new movie, with his
last feature length production being 2009’s ‘Thirst / 박쥐’, since then he’s made a couple of short films with his brother, but apart from that things have been relatively quiet. Then suddenly around the start of 2012, rumblings began to emerge that some of Korea’s top directors had their name attached to Hollywood projects - Kim Ji-woon was going to be directing Arnold Schwarzenegger’s action comeback, Jong Boon-ho was going to be adapting a French sci-fi comic, and Park Chan-wook, well, he was going to be directing a Wentworth Miller (yes that Wentworth Miller, although he’s credited under the pseudonym Ted Foulke) penned psychological thriller.

While the chances of anyone ever guessing that the guy who made ‘OldBoy / 올드보이’ would end up directing a movie written by the actor from ‘Prison Break’ were pretty slim, general reaction seemed one more of curiosity rather than the usual fan boy bickering and whining that traditionally greets such announcements. ‘Stoker’ managed to keep a sense of mystery to it even after the trailer came out, the basic premise of a mother & daughter grieving over the loss of their husband & father, only to have a mysterious uncle turn up out of the blue to stay with them, was all that was known.

Read more »
Posted by Paul Bramhall at 2:45 PM No comments: 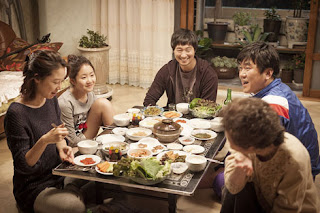 The words boomerang and family to some may be terms that have no relation whatsoever. However Song Hae-seong’s Boomerang Family defines the colloquialism in an approach that is relatable to all. It is often said that no matter what we will return to our families - from cradle to grave we’re bound by binds of blood, intimacy and inherent nature. This is the setting of Song Hae-seong’s familiar plot. The insight to this Korean family; made up of siblings who constantly quarrel and a mother who harbours a million and one secrets is not so unfamiliar that they could even be Australian, Arabic or even Azerbaijani! But it’s the Korean character’s nuances that make this film differ from recognizable cinematic narratives.
Read more »
Posted by Unknown at 2:36 PM No comments:

As a fan of short films who deplores the fact that they are not exactly the easiest items to discover in mainstream pop culture, I was quite pleased to review the 10 items in the KOFFIA 2013 Short Film Competition. I felt I was able to engage, empathise and most importantly, enjoy the broad spectrum of issues and themes covered by each film. Without further ado, here are my two cents on each short film:

Chase Lee will take you on a five-minute ride that will give you the urge to overcome any obstacle in your way and achieve all accomplishments you have sought out. The challenge to defy the odds is portrayed by the protagonist wanting to shoot at a basketball court. The usage of a mime works effectively, illustrating the mental challenges and aspirations to be able to shoot freely. Eventually, the mime is able to successfully make a layup, showing that most, if not all obstacles start within one's own head. If we are determined and have the urge to succeed, it will happen. The music provides a fitting touch to have belief – ‘La croyance’ in French – no matter what the odds may be. The protagonist's determination can be applied to situations in our everyday lives, and should be done so.

Passing moments, staircase wit, the inexplicable feeling of mutual understanding but being unable to express this sentiment freely: Inevitable Paradox summarises all these themes and images succinctly and effectively in three minutes, while leaving the viewer with food for thought that lasts much longer than the film itself. As the single green leaf flows downstream, so does time and all the various stages of the human condition: childhood, adolescence, university or working life, eventually followed by retirement and death. Days blur into one another and eventually your entire existence passes by you. The usage of both Korean and English dialogue and photographs instead of frames adds a nice touch and reinforces the theme of discrete days agglomerating to become a continuous flux. Perhaps the next time you go out for some fresh air or a cigarette to take a break from work, you too will realise the contradictory intricacies of this existence we call life.