If you think your family is weird, think again. 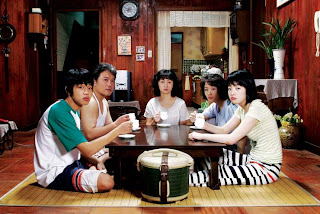 From the director who brought the touching and original Korean box-office hit, Marathon, Jeong Yoon Cheol’s second feature, Shim’s Family, is a black comedy wrought with surprises, eccentric characters and a brilliant cast that explore the dynamics of a bizarre Korean family.

While a dysfunctional family try to maintain a sense of normality, despite their individual internal struggles and weird personalities, things prove increasingly difficult to hold together when old skeletons begin to emerge from their closet and haunt their relationships.

With a knack for finding dramatic power within original and distinct characters in his films, director Jeong infuses universal qualities and an ordinary sense of hope and failure into characters that have great depth and personality in Shim’s Family. This creative strength in his filmmaking makes Shim’s Family an atypical Korean comedy that is exciting, worthy of attention, and above all things, fun.

Posted by Raelene Loong at 10:59 AM No comments:

The Korean Film Festival offers more than just a showcase of films. KOFFIA will host a range of cultural acts and performances to complete your Korean experience and hunger for more.

TRADITIONAL MUSIC & DANCE
The arrival of KOFFIA for the first time in Melbourne will be marked by a special Korean traditional music and dance performance by Melbourne based Korean culture club SORI. Enjoy the lively sounds of Korean traditional music and the beautiful dances performed in colourful costume. Performing in the heart of Federation Square, we hope it will your KOFFIA experience a memorable one!

The sound of Gayageum, a Korean traditional string instrument like a long zither, will fulfill your ears on this peaceful Sunday afternoon in the ACMI Foyer. Don't miss this rare chance to listen to a Gayageum performance in Melbourne and to experience authentic Korean traditional music. 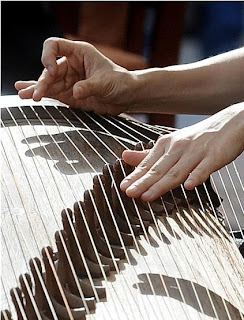 HAVE YOUR NAME WRITTEN IN KOREAN
Your own name written in Korean! A small souvenir from Korean Film Festival. The Film Festival Staff will write down your name in Korean - it looks awesome! 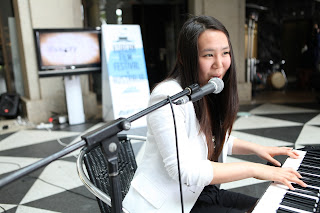 HANY LEE
An Australian born Korean rising star, Hany Lee (singer-songwriter) will perform at KOFFIA 2011. After her first performance at KOFFIA 2010 in Sydney, we are honoured to have her again in her hometown Melbourne. Enjoy her music before the film on Monday evening at ACMI as we celebrate the Korean Thanksgiving holiday, Chuseok!

Posted by Raelene Loong at 12:19 PM No comments:

KOFFIA is proud to be showcasing director Woo-Jung Kwon’s Earth’s Women – a lively and fascinating documentary that is as complex as it is engaging. 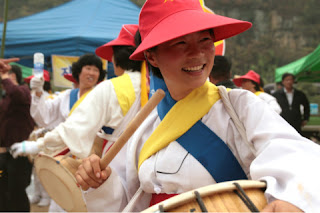 Three women - Kang Sun Hee, Byun Eun Joo and So Hee Ju – are college friends who have all chosen to lead a rural life, supporting the farming work of their husbands. Despite their idealistic notions and love for rural living, a peasant movement soon sweep the women into facing the harsh realities of being female farmers. Being mothers, wives, and daughter-in-laws, the various roles the women play in their rural lives are both remarkable and fascinating. 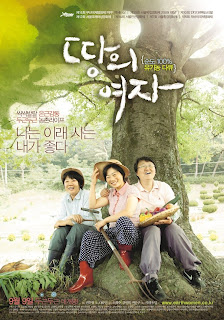 Shot over the course of one and a half years, Earth’s Women itself is documented from the creative and observant eye of Kwon Woo Jung, whose first feature documentary, Return of the Land, won the Human Rights Film Award of the Year at the 9th Seoul Human Rights Film Festival in 2005. With a career that is marked by a connection to women and the environment, director Kwon gives Earth’s Women a deeply felt personal touch and an a sense of authenticity, honesty and passion for the lives of these three women and their stories.
Winner of  Best Film at Seoul Independent Film Festival and Best Documentary at Busan International Film Festival, Earth’s Women is a Korean cinematic experience not to be missed. 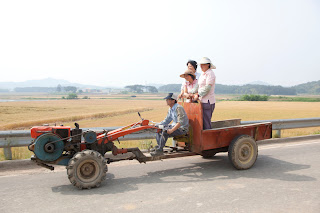 Posted by Raelene Loong at 3:37 PM No comments:

As we grace Melbourne for the 1st time, we thought it would be nice to start a dialogue about Korean Film in Melbourne. How do you access it? What is its history? What films have succeeded or failed in this city? To create this discussion we have formed an incredible lineup of experts to talk about their relation to Korean cinema.

Chat with Dr Adrian Martin - Monash University, Al Cossar - Melbourne International Film Festival and Christian Were - Madman Entertainment about everything from the critical point of view, analysis of distribution, and festival exhibition. For true hardcore Korean film fans this is an event not to miss!

Follow this FREE forum by watching possibly the best Korean film of all time on the big screen in 35mm, "JSA Joint Security Area".
Posted by Unknown at 9:18 PM No comments:

It is official, KOFFIA 2011 has once again satisfied Sydneysiders with a Hunger for Drama! We made people HOLD ON TIGHT with hard-boiled crime thrillers and gut-busting family comedies. Check out what the audience thought below.
The 5 Most Popular Films of KOFFIA 2011 as voted by our Sydney audience
1. JSA Joint Security Area: 4.5 Stars

The top 4 of those are now heading down to Melbourne, so lets see if taste differs between the 2 cities. Overall 8 sessions received a 4.5 star average, 7 sessions a 4.0 star average, and just 2 sessions a 3.5 star average. Crime and Punishment (The Unjust, The Man From Nowhere), Brothers Divided (JSA, Secret Reunion) and Ride the Dream (Bunt, A Barefoot Dream) proved to be the most popular themes of the year. Another outstanding result for KOFFIA and further proof that our audience was highly satisfied.
Melbourne, its almost time to ...... HOLD ON TIGHT!!!
Posted by Unknown at 10:56 AM No comments: