Feature Film Focus: the rise of Korean Animation at KOFFIA

This year, the KOFFIA lineup has expanded to include a wider range of films, that sees animated feature films screen for the very first time. This year's ANIMATION program reflects a new trend in the burgeoning Korean film industry, sparking a bright future for this often over-looked form of storytelling.

Korean animators have found their successes from working in large scale productions for a number of years, ranging from James Cameron’s Avatar to The Simpsons Movie. KOFFIA 2012 will present 2 different and juxtaposing feature films LEAFIE: A HEN INTO THE WILD and THE KING OF PIGS.

LEAFIE: A HEN INTO THE WILD, based of a popular children’s book, went on to be the highest grossing Korean animation of all time, and will have its Australian premiere at KOFFIA. Directed by Oh Seung-yun, the story follows an ambitious hen who has dreams of raising her own eggs and roaming free in the wild. After escaping from her coop, she sets out on an adventure with a young wild duck and a wise but quirky otter! LEAFIE exemplifies the Western way of storytelling with the freshness and liveliness of being a truly Korean story of family, love and finding oneself. The film was  also awarded the Best Animated Film prize at the 5th Asia Pacific Screen Awards. 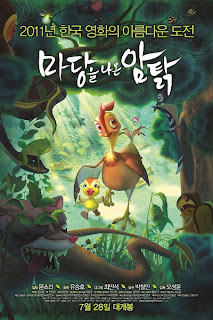 On the opposite side of this is the critically-acclaimed THE KING OF PIGS, which will also screen as part of the ANIMATION program as what is a darker and more adult take on animation. The film is Yeun Sang-ho's feature film debut and reflects on the more serious themes of bullying, violence and social class structures in a modern Korean society. THE KING OF PIGS was also the first Korean film to be competing in the Official Selection at the Sydney Film Festival this year. Furthermore, the film was also the first Korean animated feature to be invited to compete at Cannes Film Festival this year. 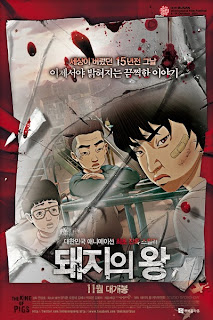 The worldwide success and recognition of these two films symbolise the Korean film industry's coming of age in the international film scene, and a change of attitudes towards animated films in Korea.

We will further explore the progress that the Korean Animation industry has made with industry forums, and even look at the possibility of the Korean and Australian industries working together.  This year's Sydney and Melbourne sessions of LEAFIE: A HEN INTO THE WILD will be followed by a Korean Animation Today Forum, featuring some industry professionals from both Australia and Korea including Cinema On The Park regular Deborah Szapiro (Co-Director of the Sydney International Animation Film Festival).

Please visit the KOFFIA website for more information on all KOFFIA sessions and forums.

In the meanwhile, get your animation fix this week at Cinema On The Park, a free weekly Korean film night hosted by the Korean Cultural Office in Australia. This week the KCO are focusing on Korean animation and will be screening THE STORY OF MR. STORY, an animated feature film of an ear-cleaner who shrinks to a size that allows him to listen to his clients' inner most secrets. 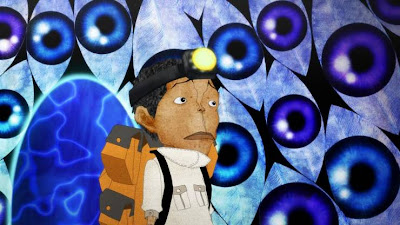 The screening will follow a short discussion panel about animation between Deborah Szapiro and Damian Gascoigne (Associate Professor of the Design and Animation Faculty at the UTS: University of Technology, Sydney). We hope you join us for this free screening and forum at the Korean Cultural Office.

Here is the final interview to the series of interviews of the short filmmakers whose films were part of the 3rd Korean Film Festival in Australia's International Short Film Showcase held this year in Sydney. Our final interview is with Lee Woo-jung, whose film 'See You Tomorrow' was part of the School Days section of the program.

As the school day come to an end, two friends see each other off with a familiar routine that has begun to bore Hyo-jung. She is tired of school life, study and her usual friends, and sets out on a night to try something new. Her once ordinary existence will forever be changed after a dark evening of exploration. 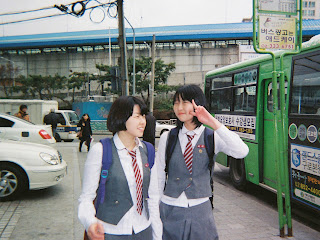 Read on for a short interview with director Lee Woo-jung and her film See You Tomorrow.
Read more »
Posted by Bo Ok at 5:55 PM No comments:

This week we put the spotlight on Dahci Ma, director of short film Ghost, which is a part of our K-MYSTERY section in our International Short Film Showcase program this year.

Ghost follows a mysterious man, who hides from the police in an empty house. He is caught up in a fantasy world brought on by extreme hunger and anxiety. However, what he faces in the end is the darkest side of himself in this austere, deceptively simple short with an unnerving, undercurrent of menace. 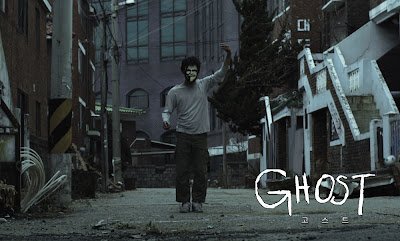 Read on for a short interview with director Dahci Ma and her film Ghost.

Read more »
Posted by Raelene Loong at 1:11 PM No comments:

Continuing our spotlight on the directors whose films make up this year's International Short Film Showcase, we turn our focus to Son Tae-gyum's award-winning Fly By Night.

Fly By Night tells the story of a teenage boy who lives a poor life with his older brother. With the uncertainty of his future, he develops a sexual relationship with an older man for money, and begins to question his sexuality and direction in life. The film will screen as part of the PANORAMA section of the short film showcase this year. 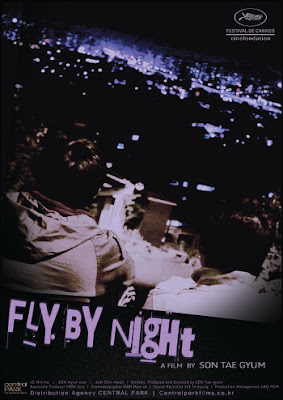 Read on for a short interview with director Son Tae-gyum and his film Fly By Night.

Read more »
Posted by Raelene Loong at 3:30 PM No comments:

As part of our International Short Film Showcase, we put the spotlight on the directors whose films make up our program to learn more about themselves and their films. For more information about our shorts program, visit our website.

Judy Suh's short documentary ExamiNation reveals a striking cultural phenomenon in South Korea surrounding the college entrance exam, Sooneung. It follows a day in the life of one student, Bitna, who as been preparing for the grand exam for years. The documentary sheds light on how the exam influences an individual as well as a whole nation. ExamiNation will screen as part of the SCHOOL DAYS section of the International Short Film Showcase. 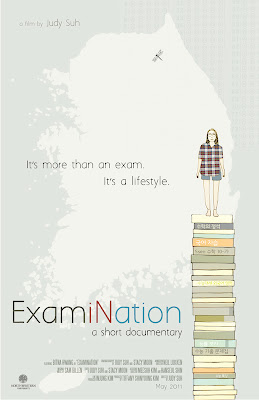 Read on for a short interview with director Judy Suh and her short doco ExamiNation.
Read more »
Posted by Raelene Loong at 1:56 PM No comments:

For the first time KOFFIA will present a selection of the best and latest short films from Korean filmmakers based all across the world. This International Short Film Showcase will see 11 Australian Premieres and 1 Sydney premiere take place across 3 categories in this free program at KOFFIA 2012.

Click through for the line-up and read about our 3 categories, PANORAMA, K-MYSTERY and SCHOOL DAYS.

Read more »
Posted by Raelene Loong at 5:09 PM No comments:

Director Kim Hee-jin's award-winning short film A Brand New Journey tells a story of Byung-hwa, a middle school boy, who wants to go on a school trip but doesn't have the money to afford it. Having already screened at 6 film festivals, including the likes of the Jeonju International Film Festival, Seoul Independent Film Festival and Asiana International Short Film Festival where it won the Special Jury Prize, Best Short Film prize and Best Korean Short Film prize respectively, A Brand New Journey is an enlightening story of a young man who simply longs to be an ordinary school boy. 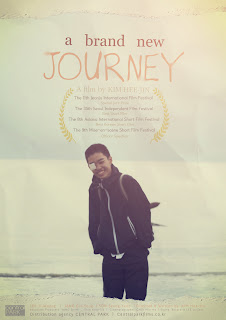 A Brand New Journey will screen in the SCHOOL DAYS section of KOFFIA's new shorts program, the International Short Film Showcase, which will feature a variety of short films from up and coming Korean directors from around the world. For more information, see our official website.

Read on for a short interview with director Kim Hee-jin and her new short A Brand New Journey.

Read more »
Posted by Raelene Loong at 3:02 PM No comments:

This year's festival tagline 'Discover Your Connection' asks you to discover what brings you closer to Korea. Film has, without a doubt, the power to do this. From stories of love to war, comedy to heartache, the 3rd Korean Film Festival in Australia will both strengthen and help you discover your own connection to Korean Cinema.


With less than 50 days till KOFFIA, we are looking for bloggers to be a part of our KOFFIA Blog team, and to share their very own connections. No matter if you are a seasoned film buff, the occasional blogger, or someone who simply wants to be a part of the connection, WE WANT YOU! 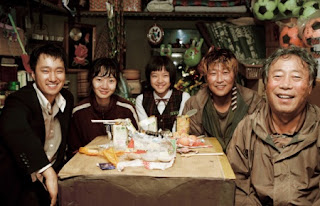 Entries can be a review of a Korean film you love or have recently seen, or they can be about your favourite Korean actor, director, cinematographer, music supervisor, gaffer... (you get the picture). Have a read of Samson's review of director Bong Joon-ho's masterpiece Mother, or delve into Sarah's article about the very talented Song Kang-ho.

We also welcome you to write about your connection to Korean cinema. Tell us about how you found your interest in Korean cinema, or about your curiosity to know more about it. For an example, check out Paul's article about his first encounter with Korean Cinema, or an aarticle I wrote for this year's Korean Film Blogathon on my discovery of Korean Cinema.

If writing isn't your thing, but you still want to share (or if you love to talk!), send us a short video of your connection to Korean cinema! See our Hungry For Talk compilation we made from last year's videos below:

Now you might be wondering - what's in it for me? You will have your article or video posted here on the blog, which will be shared across our social media sites for others to join your connection. Your name will also be added to a very exclusive list of connections on our website along with the article or video you have submitted.

So start writing and join the connection! Submit all your articles, videos, expressions of interest or enquiries to me at r.loong@koffia.com.au.

Posted by Raelene Loong at 3:42 PM No comments: