In the Footsteps of the Stars: My Trip to the KOFIC Namyangju Studios

It was a bitterly cold Thursday morning some time in November 2010 when my friend & I decided to brave the icy conditions to make the 2 hour pilgrimage to the KOFIC Namyangju Studios. It was my fourth visit to Korea, and somehow despite of always being on my list of places that I had to see, such things as soju, karaoke, and a general lack of sleep that seemed to follow me whenever I visit the Korean peninsula always got in the way of me making the journey. Of course, this time was not a whole lot different, but somehow the shame of failing to make it despite visiting Seoul several times before, combined with a frosty determination, drove me to make sure I set foot in what was quickly becoming an almost mythical destination even if it was the last thing I’d do. 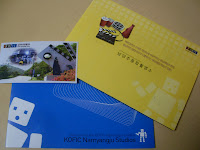 Of course, much like the , there is no nice and easy way to get to the actual studios. Instead it involves getting on a bus for almost 2 hours to Gyeonggi, and when all of the small towns and signs of civilization fade away and you are confronted with the rugged landscape that is the Korean countryside, you ring the bell to get off at the next stop. The next stop was on the corner of a non-descript road, alongside a murky lake almost disguised by the volume of reeds cropping out of the water, by which stands an old battered wooden hut, long out of use with cut off electrical wires strewn on the floor of it’s dusty interior, which we glanced at from behind it’s locked down windows. 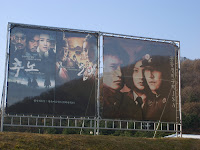 However my Korean friend looked pleased enough, “This is exactly how it’s described on the internet to explain where we get off!” he chirpily announced. So far so good, the next stage is to call a taxi, whose number has been conveniently nailed against one side of the hut, and the rest of the journey has to be completed by car, or a lengthy hike, whichever you prefer.

Once there though, the studios are indeed worth the journey. Not in the kind of super glitzy overbearingly tourist trap way Universal Studios are, the Namyangju Studios are fully operational and in use on a daily basis. Whereas Universal Studios gives the illusion of magic being made, here magic really is being made, and the figures you see behind the windows of the various buildings on the stroll up into the main grounds of the site are hard at work making it happen. 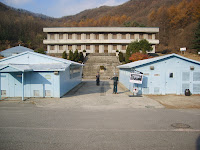 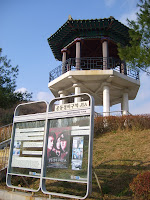 The main attraction of a visit to the studios are the four impressive outdoor sets that you are free to walk around. The one I was most looking forward to seeing was the full scale recreation of Panmunjeom, the truce village within the borders of the DMZ where the movie ‘JSA / 공동경비구역’, amongst others, was filmed.  It really gives you a greater appreciation into the craftsmanship that goes into making a good set, as my friend & I stood on the line which separates the South from the North, in the exact same spot Lee Byung-hun & Song Kang-ho did, in the famous scene that makes the closing photo of the movie. 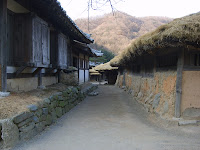 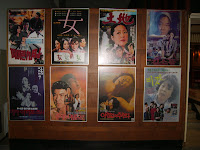 The other sets consist of a couple of traditional Korean villages from the Chosun Dynasty, both of which are very charming and incredibly realistic. Amongst the movies filmed here are ‘Duelist / 형사’, ‘Strokes of Fire / 취화선’, and most recently ‘Detective K / 조선명탐정: 각시투구꽃의 비밀’, and the dusty rustic network of streets are instantly recongnizable for anyone familiar with the movies. The houses are all free to roam around as you like, of which we took full advantage of, racking up whole memory cards worth of inspirational / idiotic posing photographs. It should be pointed out that when visiting the studios, you are at the mercy of filming schedules, as sometimes sets will be closed off if they’re in use (we where quickly ushered off a stationery train carriage in the middle of trying to re-create a shot from ‘Nowhere to Hide / 인정사정 볼 것 없다'. However today was a Thursday, and not only was there minimum filming going on, there was also a distinct lack of any other visitors. Essentially my friend & I had a whole bunch of movie sets to go crazy in with nobody to bother us. 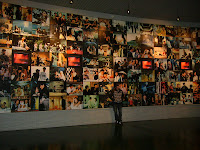 The final set is a full scale traditional Korean house, originally from Woondang in Jongro-gu, the roof-tile house was restored at the studios in 1994 as a typical example of an upper class mansion in the late Chosun Dynasty. The house just by itself is a thing of beauty to look at, however on a clear autumn day such as this one, with the backdrop of the mountains completely covered in red and brown leaved trees, you could feel for a brief moment that you where no longer in modern times, but in some distant era within the land of morning calm. 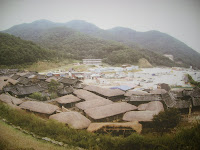 Somewhere along the way, we became aware that it was so cold we could no longer feel our ears, so we decided to check out what the inside of the studios had to offer. Thankfully apart from heating, inside turned out to be just as much fun as outside. Kicking off with a huge warehouse full of every prop and costume imaginable, from rickshaws to treasure chests to swords, it would be easy to get lost just in this one room for a day. There was also a museum dedicated to the history of Korean movies, dating back 50 years which was really insightful, and hats off to KOFIC for actually getting some of these movies cleaned up and out on DVD. Best of all though was a blue screen room, where you could get to be the star of your own movie. One example of the fun to be had was the simple rope ladder against a blue wall, however once you climb it and take a look at the TV screen, you realize you’re actually dangling from a helicopter flying high above the city!

Throw in an onsite cinema, and I’d safely say that for any fan of Korean cinema, a trip to the KOFIC Namyangju Studios is well worth it, no matter what the weather. More information can be found at the officialsite