Get a sneak peek at Richard Gray's thoughts on the film he will present this Thursday at Cinema on the Park, the X-treme Korea hit I Saw the Devil. Come along for a free film at the Korean Cultural Office in Sydney!
Korean cinema isn’t suffering for a lack of revenge films, so the prospect of another one in  I Saw The Devil was hardly the most thrilling of premises to start a legitimate phenomenon. Yet it is hard to imagine a Korean film that has sparked more discussion in the past few years than Kim Ji-woon’s  I Saw The Devil, a beautiful, brutal and morally confronting thriller.
Joo-yun (Oh San-ha) gets a flat tire on a dark and lonely night, and Kyung-chul (Choi Min-sik) offers to help her out with a lift. She declines, but Kyung-chul’s true nature as a remorseless serial killer is soon revealed, and she is murdered and dismembered. However, Joo-yun was the daughter of police Chief Jang (Jeon Kuk-hwan) and the wife of secret agent Soo-hyun (Lee Byung-hun), who is determined to exact his revenge on Kyung-chul non matter what kind of monster he becomes.

In reference to his 2005 mega-breakthrough A Bittersweet Life, his follow up to the original and twisty if somewhat ponderous A Tale of Two Sisters, Kim Ji-woon cited Jean-Pierre Melville as a massive influence. Looking at the Korean cinema on the landscape at the time, he commented in a 2006 interview with the BFI that “In Korea most films about violence focus either on becoming box-office hits or on communicating to critics.
Park Chan-wook's vengeance trilogy is an example of an auteur courting both, as is Bong Joon-ho's Memories of Murder”. With  I Saw The Devil , Kim is firmly in Park Chan-wook territory, echoing the mixed morality of Sympathy for Mr. Vengeance and Oldboy, and trying to find a balance between the object eye of the camera and the audience-driven material he spoke about half-a-decade earlier. 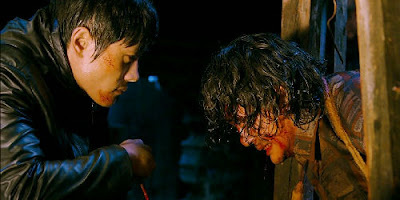 Yet for this to have been audience-driven material, there has to be a safe place for the viewer to take a small refuge in. I Saw The Devil offers no such safety net, with a completely remorseless killer in the always brilliant Choi Min-sik’s Kyung-chul, and Lee Byung-hun’s character of Soo-hyun rapidly becoming the same breed of monster he is trying to eliminate. This is not a subtle point on Kim’s part, directly speaking to it at a dinner part of the damned with the cannibalistic Tae-joo (Choi Moo-sung). Reminiscent of Texas Chain Saw Massacre by way of Japan’s Sion Sono, it’s a celebration of the grotesque.

Which is where I Saw The Devil treads a very thin line. In its native Korea, the Korean Media Rating Board forced Kim to recut the film involving seven cuts to make it legally available to audiences. Kim is pushing the boundaries of what is acceptable on screen, but does so in a beautifully shot and steadily paced first half of the film. Yet if this is gore to comment on how violence breeds violence, then it is unrelenting in its portrayal. As the film falls into more typical audience-driven chase sequences and nail-biting Se7en territory, Kim bloodies the water before what should be a shocking conclusion.
The legacy of I Saw The Devil will undoubtedly not be more clever commentary on the subject of desensitisation to violence, but rather it will escalate the cinematic violence in Korean and international cinema. Ironically, this will prove the point of the film, making Kim’s work the cinematic equivalent of the psychotic killer depicted in the film, perfectly adept at his own craft but inspiring horrible deeds in others. Kim’s own career, like his contemporary Park Chan-wook, is now headed to the English-speaking world, directing Last Stand with Arnold Schwarzenegger next. 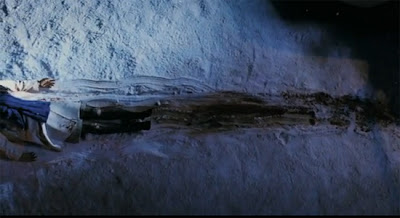 Richard Gray
Richard Gray is the Editor of the online magazine The Reel Bits, and this KOFFIA Blog. He is also a regular guest at the KCO's Cinema on the Park. You can read Richard's unfiltered train of thought on Twitter @DVDBits.
Posted by Richard Gray at 11:25 AM